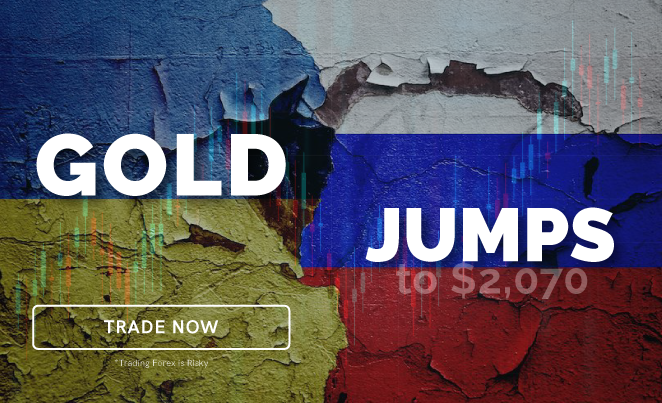 Crises are often seen to be full of threats with respect to amateur traders, yet full of abundant opportunities with respect to the professionals. Large economic and geopolitical changes are usually accompanied with massive long and short trading volumes, where significant amounts of wealth transfers are recorded. The Ukraine invasion spiked rippling volatility across several markets, where the safe haven, Gold, the leading U.S index, ,and the main source for war, , are seen to be attracting the greater amount of investor participation.

Over the years, when inflation or panic invade economies, gold soars sharply towards new highs, and corrects sharply after tensions ease out. This fact became a guideline for professional traders to set their strategies for the gold market amidst turbulent conditions.


*Trading Forex is Risky
Once again, gold retained its safe haven label due to rising geopolitical tensions, and rising only %0.2 away from its all-time high. Since history rhymes, the large spike moves for gold might record a new all-time high, and be followed by a steep correction, as a reaction to potential resolutions after the economic and geopolitical tensions ease down.
As worldwide panic rippled across nations to close their borders, as a defensive strategy against the new virus, the safe haven soared towards its all-time high of $2,074/oz.
In 2008, gold surged to new nominal all-time highs (at the time), breaking the 1,000$ per oz. From March 2008 12 to October 2008, prices fell to their lowest value for the year, 692.50$/oz, the moment of the bailout of Bear Sterns and the bankruptcy of Lehman Brothers. However, gold managed to break its $1000/oz record, and surpass the price level all the way to its highest recorded value, $2074/oz in 2020.

(The above chart disguises the fact that the US$ gold price increased at a fairly consistent annual rate, and has since experienced a multi-year correction (as opposed to a collapse).

A Few Steps To Enroll